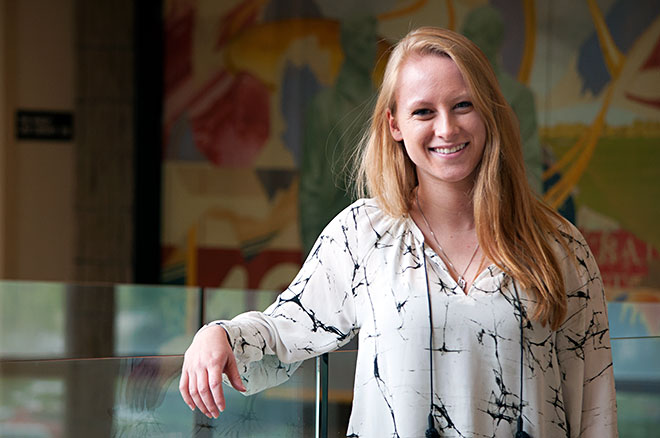 “The best three years of your life that you will never want to experience again.” That was how a current lawyer and mentor described law school to me. And let me tell you, he was right. I am currently in my first year, and it is the most challenging, stressful thing I have ever done. That being said, I am loving law school! It is amazing, and I have made closer friends in the last few months than I had through years of undergrad.

I have had my sights set on law school since high school. I am a member of the inaugural class of KU’s Legal Education Accelerated Degree Program. It is a 3+3-year program for my bachelor’s and law degrees. Part of being in the LEAD program means that my first-year law classes are counting toward the last year of my bachelor’s degree, and after I finish my 1L year I will graduate from undergrad.

I was a summer starter, so I finished the last day of my junior year undergrad on a Friday and started orientation at Green Hall the following Thursday. It was intense and nerve-racking, but I was more than excited to pursue the education I had been working toward for the last three years. Being in an accelerated program means that I’m the youngest of almost all my law school classmates. On the first day of classes, my professor went around the room asking what degrees we had, what schools we had them from and whether we had been in the workforce before law school. For everyone else that meant, at the very least, listing their bachelor’s degree — and for some their master’s or higher! Many listed different work experiences they had after completing their most recent level of education.

Then the professor got to me.

Now remember, I haven’t graduated yet. After listening to all the people who had spoken before me, I really didn’t know what to say. So, in a fairly quiet voice, I told the class (and the intimidating professor) that I am still working toward my bachelor’s degree from the University of Kansas and explained the LEAD program.

Starting law school at age 20 has had its ups and downs. But here are the top five things about being a little bit younger that made law school better:

— Samantha Wagner is a 1L and KU Law Student Ambassador from Paola, Kansas.