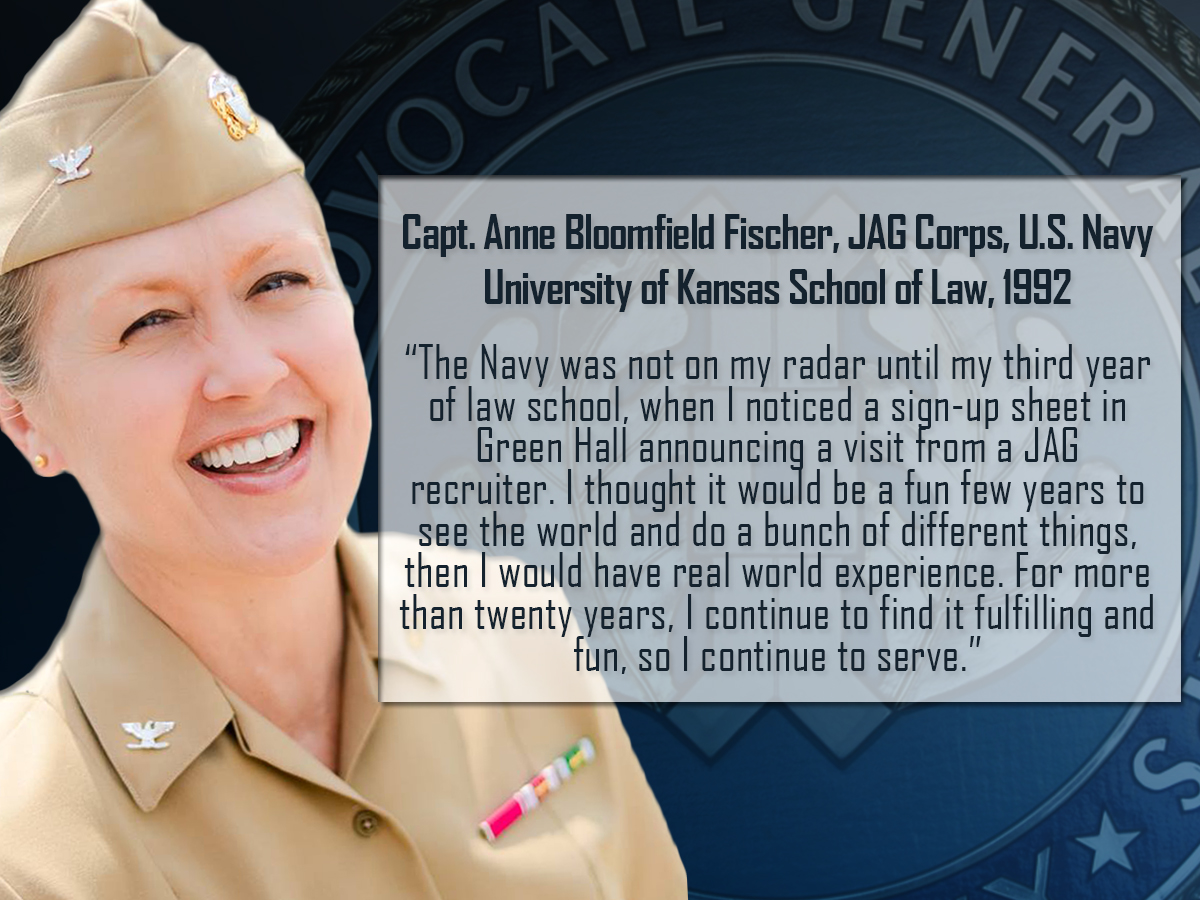 The Navy was not on Capt. Anne Fischer’s radar until her third year of law school, when she noticed a sign-up sheet in Green Hall announcing a visit from a JAG recruiter.

“This was before the movie A Few Good Men and before the TV show JAG,” Fischer said. “I didn’t realize the Navy had lawyers. I thought I’d sign up and see what they had to say.”

Fischer found the presentation compelling. “It was a three-year commitment at the time. I thought it would be a fun few years to see the world and do a bunch of different things, then I would have real world experience and could do something different afterward if I didn’t love it.”

More than two decades later, Fischer is still loving it, and still serving.

After finishing law school and passing the bar examination, Fischer completed Navy officer and legal training in Newport, Rhode Island, then reported for duty at the Navy’s legal services office in San Diego.

“When I reported I got a stack of files and started seeing clients very soon,” Fischer said. “That was one of the big selling points–they give you immediate responsibility.  I also loved living and working near the ocean.”

Fischer started off processing administrative cases and quickly progressed to more serious issues, prosecuting rape, assault and child sexual abuse cases. “I was doing that within the first couple years out of law school, and I was the lead in these cases,” Fischer said. “It was a lot of responsibility and hard work, but very rewarding.”

One of Fischer’s biggest cases early in her career involved a date rape. “It’s the typical story,” Fischer said. “She said she didn’t want to have sex, he said he thought she did, so it was a contested rape trial. The evidence showed that she did not consent, and I got a conviction. That was a very satisfying experience.”

While teaching at the Naval Justice School, Fischer also served on the Defense Institute of International Legal Studies (DIILS) mobile education teams. The teams, composed of members of all branches of the military, work with partner nations to build capacity and implement democratic rule of law and equitable military justice systems.

Fischer served on a mobile education team deployed to Moldova shortly after the collapse of the Soviet Union. “The folks in Moldova had just gained independence,” Fischer said. “At the time they were operating under the Soviet system and were very interested in how we ran our military justice system. They found it interesting that if a sailor got in trouble, he or she could go to a legal services office and have a Navy lawyer assigned to represent them, advocate for them, and make sure they got a fair trial. For us in the U.S., we think, of course they have rights! They should be represented, they should have a hearing, they should be able to present evidence and call witnesses. At the time, these concepts were new to Moldova.”

Fischer later served on a mobile education team to Mozambique, a former Portuguese colony that was recovering from a protracted civil war and transitioning from a Marxist regime to a democratic system. The DIILS training seminar introduced the Mozambique Armed Defense Forces to the concepts of the rule of law, human rights and civilian control of the military. It also provided an opportunity for rival factions within the military and civilian leadership to come together and discuss their differences and build relationships. Fischer gave presentations on the U.S. military justice system and facilitated interaction between the Mozambican participants.

Both assignments in Mozambique and Moldova were fascinating to Fischer. “Seeing firsthand the living conditions in former communist nations was very eye-opening and gave me a greater appreciation for how fortunate we are in the United States. Despite the hardships, the people she met in both countries were warm and friendly. “It was gratifying to get to know the military personnel in these countries. My experiences reinforced the concept that most people in this world want the same things – “Life, Liberty and the pursuit of Happiness” as our nation’s founders so eloquently wrote.”

After three years stationed in Italy, and another three years working for the commander of the Navy’s west coast ballistic missile submarine fleet near Seattle, Washington, Fischer is currently based in D.C. There she has worked at the Washington Navy Yard and in the Pentagon in legislative affairs and as executive assistant and special counsel to  the General Counsel of the Navy.

The Navy offers post-graduate education for lawyers in three areas: international law, environmental law and trial advocacy. Fischer took advantage of the program to earn an LLM in environmental law from the George Washington University Law School, and put her environmental expertise to work on Capitol Hill. The effect of Navy sonar training on marine mammals was a hot-button issue while Fischer was working in legislative affairs, and she used her expertise in environmental law to address the concerns.

“There was a big outcry by some environmental groups that claimed Navy sonar was injuring marine mammals,” Fischer said. “This became a significant issue that included litigation in the 9th Circuit and before the Supreme Court, and had the potential to negatively impact Navy training and readiness. We had to finalize environmental compliance documents, rebut plaintiffs’ challenges in court, address public comments, and respond to Congressional inquiries. On the Hill, our objectives included helping members of Congress better understand both the effect of sonar on marine mammals, and the strategic importance of Navy sonar training.”

The Navy has specially trained marine mammal lookouts on all vessels equipped with sonar and follows stringent mitigation measures to avoid marine mammals during training exercises, Fischer said. “These measures are effective in preventing impacts to marine mammals.”  On the Hill, in the courts, and in the press, Fischer played a key role in the Navy’s ability to inform and successfully rebut challenges to Navy operations.

“My philosophy was as long as I’m having fun I’m going to take another set of orders,” Fischer said. “I continue to find it fulfilling and fun, so I continue to serve.”

–By Emily Sharp. A previous version of this story appeared in the spring 2015 issue of KU Law magazine.