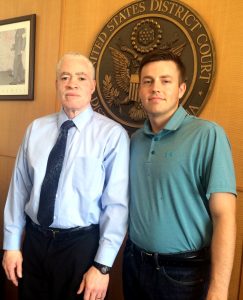 I had always thought about going to law school as a kid but never truly had an opportunity to see what life is like as an attorney until I had my first legal internship as an undergraduate.

As a student at the University of Arizona, I interned in U.S. Probation and Pretrial services for three years. It was one of the best job experiences I ever had, because it gave me an intimate look at how the federal courts work, as well as how attorneys work with their clients to preserve their rights.

During this experience, I got the chance to meet the Honorable Chief Judge Raner Collins. He was the first judge I met during this internship, and I was so impressed with how intelligent, friendly and inspirational he was. I quickly made up my mind as an undergrad that sometime during law school I would try to work for him as an extern or clerk.

Sure enough, following my 1L year, I was given the opportunity to apply to work in his chambers. These positions for law students at the federal court in Tucson are competitive, especially with another law school just a few miles away. My lawyering professors helped me produce a great writing sample, and accomplished faculty members wrote me letters of recommendation, for which I am extremely grateful. It would’ve been difficult to obtain a spot in Judge Collins’ chambers without the help of KU Law. 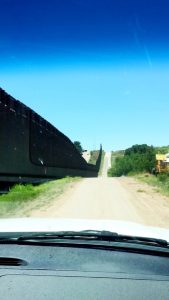 Like many 1Ls going into their first summer jobs and internships, I was nervous at first because I wasn’t sure what to expect, but I was happy to be put at ease after the first meeting in Judge Collins’ chambers. He’s personable and friendly. There was even a business casual dress code, which was convenient considering how hot Arizona summers can be!

The judicial field placement program was extremely rewarding. Not only did I learn a lot from my work in the judge’s chambers, but I also got the chance to tour two different federal corrections prisons in Tucson and Florence, Arizona. I also got an exclusive tour of the Arizona-Mexico border in Nogales, put on by U.S. Border Patrol in conjunction with the courthouse.

I am interested in a litigation career, and this field placement assured me that I’m on the right path. This summer I researched and drafted bench memoranda while researching complex legal issues. I learned a great deal from the communication I had with Judge Collins and other members of counsel, a highlight of the experience. It was truly the best summer I’ve had as a student.

– Davis Bauer is a 2L from Phoenix, Arizona.