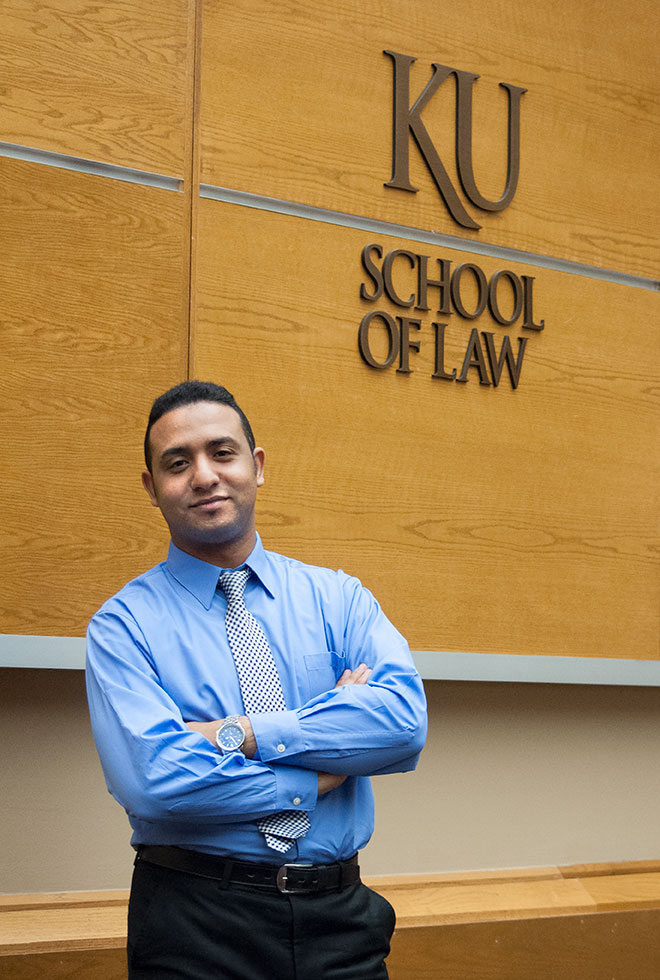 Fulbright scholar Ahmed Mansour is calling Lawrence home for the next three years, and just a semester into his stay, he’s taking the Fulbright’s mission of mutual cooperation and cultural exchange to heart.

A native of Luxor, Egypt, Mansour completed his undergraduate degree in English and Sharia Law at Al-Azhar University in Cairo, then earned an LL.M. in intellectual property from the University of Derby in England. After returning to Al-Azhar to teach and practice at a Cairo law firm, Mansour applied for the Fulbright program, which increases global understanding and cooperation through scholarly exchanges. Mansour will earn his Doctor of Juridical Science (S.J.D.) at KU Law before returning to his practice and teaching duties at Al-Azhar.

“Having Ahmed here is exciting,” said Professor Mike Hoeflich, Mansour’s faculty advisor. “Like all of our S.JD. students, he is a bright, young foreign lawyer, and the first to receive a Fulbright. This marks a major milestone in the growth of our program and shows the quality reputation our school, faculty and students enjoy at the highest levels.”

“It’s huge to have two different legal experiences,” Mansour said. “I already have a French and Latin legal background, so when I started to work in common law, I found little differences. I started to see how the two systems can get mutual benefit from each other.”

“Islamic law understands the value of having property protected, but it also protects people who need access,” Mansour said. “It’s hugely important in many countries around the Middle East these days. Fewer people are lobbying the pharmaceutical industry, which is setting prices regardless of the financial status of many people. Islamic law puts some rules in favor of society and public interest.”

The differences in educational systems have proved illuminating, too. “Most of the courses I’ve taken in the UK are more theoretical, philosophical,” Mansour said. “Here it’s more practical — perfect for someone who would like to have a practicing career and a scholarly career.”

Mansour also believes that his expertise in Islamic law will help him confront misconceptions that create barriers to mutual understanding.

“Islam unfortunately now is associated with acts of terrorism and killing,” Mansour said. ”It’s so sad to see this. It’s totally unrelated to Islam. Islam is a religion that encourages people to have cooperation with others, mutual respect, understanding.”

Mansour is encouraging that mutual respect on a personal level as well as a scholarly one. When he observed homeless people on Lawrence’s streets, he got involved with the Lawrence Community Shelter. He plans to continue his commitment to service when he returns home to Egypt and dreams of opening his own soup kitchen someday. When he’s not volunteering, he spends his free time exploring Lawrence’s dining scene — the Ladybird Café’s chicken fried steak has become a favorite dish. One of his most memorable moments as a new Lawrencian was scoring a 100-year-old painting from an estate auction.

Mansour is also heartened by the warm reception he’s received from his KU Law classmates, faculty members and mentors. “American students are open to new people and cultures,” he said. “As long as they know you need help, they will offer it — sometimes without even asking.”