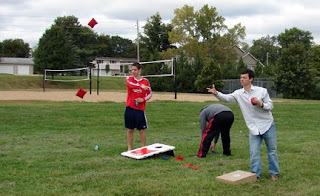 The KU Sports & Entertainment Law Society put on the first Law School Olympics on Saturday, Oct. 3, at Dad “Perry” Park. Six teams, made up of both law and non-law students, fought the early morning cold weather only to be rewarded with a beautiful fall afternoon.

To kick off the event, the PIG tournament started on the basketball courts as the bag toss showdown was going on at the top of the hill. Sharp shooters highlighted both the PIG and bag toss tournaments, and the Olympics were off to a great start. Over-the-line waffle ball was full of diving catches, knuckling line drives and wind-aided long bombs. Everyone enjoyed the four-inning games while eating hot dogs and chips for lunch.

After the first three events had completed, we moved on to one of our headliner events — the joust. With homemade weapons and a gymnastics balance beam (thanks to event director Francie Boyer), Olympians tried to do their best American Gladiators impersonation. While nobody would have been confused for Blaze or Nitro, there were plenty of hard hits and big laughs.

The sand volleyball tournament was the one pre-finals event that incorporated all team members. Some of us still might be shaking sand out of our ears and picking it out of our teeth. The weather had warmed up, and the Olympians had loosened up enough to make a few picture-worthy dives in the sand.

Five events down, just one to go: the hot dog-eating contest. With a two-minute time limit, 10 hot dogs were looming on the picnic tables for the brave Olympians willing to try and become the next Kobayashi. Needless to say, nobody is taking on a career change. Two and a half hot dogs was the top mark.

After calculating the point totals, the top four teams were put into the dodgeball finals. The five D’s were on full display: dodge, duck, dip, dive, dodge. After a full day of great events, Francie awarded our official Olympic medals to all of our champions, both individual and team.

I want to thank all of those who came out and participated, and especially those who volunteered their help. Francie Boyer did a terrific job of organizing and running this event, and I hope that the next wave of SELS members will continue the Law School Olympics for years to come.