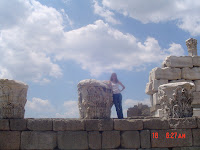 Second-year law student Ellen O’Leary
stops for a photo in the Temple
of Pergamon.

More photos on Flickr.
The second installment of the Istanbul study abroad blog by 2L Ellen O’Leary, who just finished finals in Turkey.

So much to see do! The last two weeks have been a blur of color and sound packed with school work and site seeing. Here is a taste of what we’ve been doing:

Last Friday the class piled onto a bus – rather than going to class – to leave for a weekend of excursion down the west coast of mainland Turkey. We went through Gallipoli, crossing the Dardanelles straight on a large ferry, on the way to Troy. That’s right: Troy – as in Achilles and Hector and the Trojan horse (with the KU boys inside). Amazing!!! We spent an hour or so walking through the ruins in the heat of the afternoon. Everyone was pretty wiped out, but I could have spent the rest of the day! We spent that night at a resort on the beach in Assos. Swimming in the Aegean Sea was salty and a bit cold at sunset, but it was an excellent end to a hot day.

We all got up early the next morning to visit the ruins of the Temple of Athena in Assos. There wasn’t a whole lot left, just some columns and a foundation, but the view from the hill was spectacular. Pergamon came next, home to the Temple of Trajan, altar of Zeus and Asclepion (ancient equivalent of a hospital and health spa). I got to climb all over the temple and wander through the grounds. The gravity in these places is nearly overwhelming. I cannot help but be in awe of the things the ancient civilizations accomplished. We returned to modern life that night in Izmir. The harbor is lined with restaurants, shops and a park that stretches the entire length. I taught a few people how to play backgammon (I learned the first week here) while we had tea at one of the seaside cafes.

The last day was jam-packed, starting with a tour of Ephesus, lunch and a tour of a carpet factory, a detour to the Temple of Artemis and, finally, a visit to a ceramic factory before flying back to Istanbul. Ephesus is known for the Celsus Library and its theater, but it’s so much more than that. It is the best-preserved ancient Greek/Roman site in Turkey and second only to Pompeii in the Mediterranean. Again, I don’t think we spent enough time there (which I know others would disagree with); the ruins are so extensive. In addition to the more obvious public architecture, archeologists are in the process of excavating private houses that still have bright mosaics, frescoes and tile intact. Absolutely incredible!

The carpet factory was intense. They grow and harvest their own silk for the handmade rugs. There were half a dozen looms in the production room we were shown. Each rug is made by a single woman who spends months knotting the thread in intricate patterns she nearly knows by heart. After seeing the production, we were treated to a real carpet salesman show. They served tea and raki (Turkish absinthe) during the sales pitch. Rugs of every color and material were rolled out on top of one another. They invited us to take our shoes off and walk on the rugs to discern the difference between wool, cotton and silk. I was approached by a rather hopeful salesman while I was sitting on a pile of silk rugs at the end of the presentation. I told him I was enjoying the fine rugs now because there was no way any of them were going home with me and shifted his attention to Adam, who listened to the sales pitch for quite a while. Professor Exum and her husband, however, are coming back to Lawrence with two beautiful Turkish rugs.