Striking a balance between Jayhawk basketball and law school 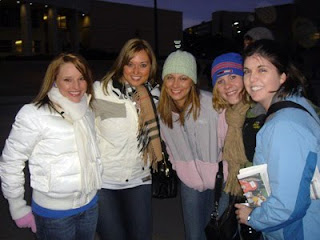 February in Lawrence means two things: School is back in full swing, and the Jayhawks are in the middle of some intense Big 12 conference basketball games!

One of the challenges of being a law student at a school where basketball is more of a religion than a sport is figuring out how to balance your time so that you can take in the games without falling behind on your studies. As hard is it may be to believe, I think I have more time for basketball games now than I did when I was an undergrad here at KU. I am going to attribute most of this to the fact that I am much more conscientious of how I allocate my time in law school than during my undergrad days, but it also helps that I joined a camping group and spend at least five hours a week sitting at Allen Fieldhouse with not much else to do but study. (That’s me on the far right in front of Allen Fieldhouse in the photo!)

One might think that joining a camping group would be counterproductive to studying, but I have found the opposite to be true. Since the Fieldhouse is conveniently located across the street from the law school, it is easy to sign up to camp before or after class or during a time when you have a couple of hours between classes. There is also no excuse not to stop in the law building and grab a book from your locker because there really isn’t a whole lot to do when you are sitting in the concourse of the Fieldhouse. Sure you could always take a nap, watch a movie on your laptop or get caught up on TV shows that you’ve missed on Hulu, but if you don’t want to feel guilty about spending four hours on a Monday night at the game, my advice is to study!

For those of you who aren’t familiar with how the camping works for KU basketball games, here is my unofficial guide:

The camping process starts in early November and repeats itself until early March. For more information on KU basketball, the official camping rules and more KU traditions, visit the KU Athletics camping page and the KUpedia camping page.