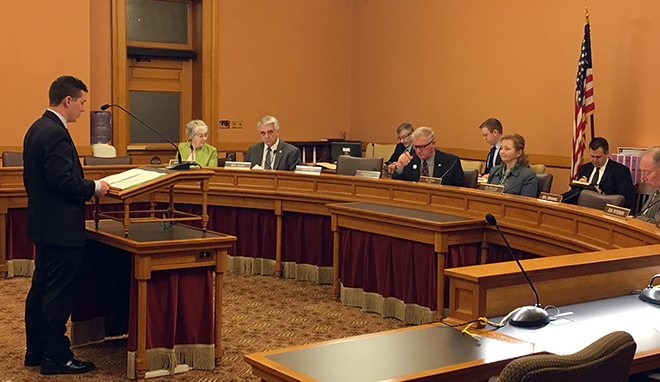 Earlier this semester I had the privilege of testifying before the Assessment & Taxation Committee of the Kansas Senate. Of all the unique and interesting experiences KU Law has afforded me so far, this one really stands out and was certainly the most unexpected.

The opportunity to testify came out of my involvement in the Public Policy Practicum during the fall semester. I enrolled to improve my research and writing skills and gain exposure to the interactions between law and public policy. As part of the practicum, students embark on the semester-long task of writing a research paper on a topic of particular interest to the Kansas Legislature. The practicum, taught by Professor Jennifer Schmidt, culminates in the submission of this paper to the Legislature for members to read and rely upon. I found this aspect of the practicum novel and almost surreal since most papers we write in school are essentially for educational purposes only and never receive exposure beyond the confines of the classroom.

The topic of my paper was Kansas’ earned income tax credit (EITC). This tax credit helps low- to moderate-income working Kansans by easing their tax burdens. However, awarding these tax credits also means reducing the funds available to the state budget. Because of the fiscal implications, the EITC has become a topic of much debate within the Legislature, with 2015 alone seeing the introduction of two bills concerning the EITC – one hoping to reduce the credit, the other hoping to increase it. 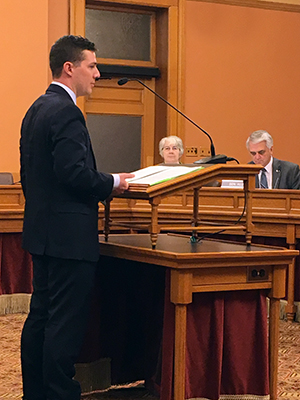 After submitting my paper and concluding the fall semester, I thought my involvement was complete. So I was surprised when, a week before spring break, I received an email extending an invitation from Sen. Caryn Tyson, chairwoman of the Senate Assessment & Taxation Committee, to appear before the committee and testify on the EITC.

Without really knowing what I was in for, but knowing I could not pass up the opportunity, I accepted Sen. Tyron’s invitation. And I am glad I did because the experience that followed was truly rewarding and enlightening.

Professor Schmidt met me in Topeka at the Capitol and introduced me to members of both houses, lobbyists, Capitol staff, and other members of the political community. Before my testimony, I sat in on a hearing about a tax increase on gasoline and witnessed the impressive oratory skills of veteran lobbyists as they advocated for their sides the issue. Following that, I was called to lead off the hearing on the EITC.

My testimony, which lasted about 15 minutes, began with an overview of the EITC and its policy implications and ended with me fielding questions from the committee. Taking their questions, while a little nerve-racking, was definitely a highlight because it showed not only that the senators had read my paper but that they trusted the knowledge I had gained in researching the topic enough to feel comfortable relying on me to answer additional questions on the subject.

And to think, prior to enrolling in the Public Policy Practicum, I knew almost nothing about tax credits in general and had never even heard of the Kansas earned income tax credit. That in one semester I could go from having essentially no knowledge on a topic to being invited to testify on the same topic is a testament to the research skills I’ve honed under the guidance of KU Law professors.

– Kevin Berndt is a second-year KU Law student from Kansas City, Missouri. He plans to pursue a career in civil litigation.