I can sum up my experience in D.C. by taking you through the events of Saturday, March 25, 2017—the day Frank, Josh and Devontè broke our collective hearts. It started like the best weekend mornings in D.C. — eating brunch with friends, mimosa in hand. For reasons I haven’t quite deduced, brunch is a way of life in D.C. (except when we’re protesting), and when you come here you better be prepared for that.

After a couple more drinks, we set out to explore a sight only D.C. can offer, thousands of cherry blossoms in full bloom. There’s something iconic about seeing the Washington Monument framed by those beautiful flowers. One of D.C.’s greatest strengths is its abundance of amazing (and free!) entertainment. I’ve spent afternoons exploring the National Museum of Natural History, the National Air and Space Museum and the National Gallery of Art, among others. Kansas will pass a tax increase before you find yourself bored in D.C. 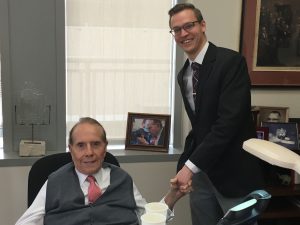 After the cherry blossoms, we headed to the KU alumni bar for KU’s Elite Eight game against Oregon. If you can’t watch the game in Lawrence, watching with a few hundred alumni and KU fans at a bar in D.C. is a nice consolation. Meeting KU alumni and other Kansans has been one of my favorite things about this experience. I’ve met lobbyists, government attorneys, members of Congress and senators. I even had the chance to ask Senator Roberts why several of President Trump’s nominees were less than honest about Russia in their confirmation hearings (this may shock you, but I didn’t like his answer). These are opportunities you can only get in D.C., and specifically, in the Sixth Semester program.

I don’t think I need to recap the KU game for you. Let’s just say the mood at the bar was more somber than Paul Ryan’s house after he couldn’t pass a healthcare bill he had seven years to work on. Of course, it was still Saturday night and we couldn’t head home yet, so we mingled with the other people hanging around. 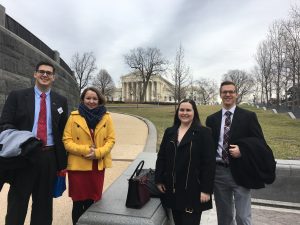 At this point I should mention my favorite aspect of life here: No one is from D.C., so everyone understands what it’s like to move here without knowing anyone. This makes people much friendlier compared to other places I’ve lived and visited. For instance, as we mingled after the KU game we ran into a few people we’d met once before. These people barely knew us, and certainly didn’t owe us anything, but after a few minutes of talking about the game they invited us to jump in their Uber and head  to a house party they were going to. Likewise, at the house party everyone was incredibly friendly and let us party with them the rest of the night. This is just one of many instances where I received uncommon friendliness from D.C. residents.

So I guess what I’m trying to say is—if you like delicious food, free entertainment, meeting Kansans doing remarkable work, talking politics like you know what’s going on, or hanging out in a big city with friendly people, then you’ll enjoy this experience as much as I have and the Sixth Semester program is for you.

– Nathan Mannebach is a 3L from Garden Plain, Kansas.