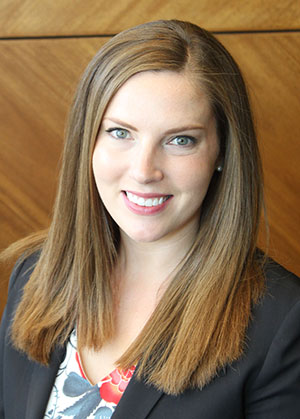 A seventh-generation Kansan, Luhrs attended Kansas State University and studied apparel marketing and public relations and received minors in both leadership studies and business. An interest in trademarks and copyrights in the fashion industry led her to pursue a law degree, and she decided to attend KU Law after receiving a Rice Scholarship. “I understand the impact that scholarships have on drawing students to KU Law,” she said. “Ultimately it was the generous support of our alumni that attracted me to Lawrence.”

While at KU, Luhrs served as managing editor of the Kansas Law Review, clerked for Judge Carlos Murguia of the U.S. District Court for the District of Kansas, and interned with the U.S. Attorney’s Office for the District of Kansas and Martin, Pringle, Oliver, Wallace & Bauer in Overland Park. After law school, Luhrs practiced at Stueve Siegel Hanson and then a small firm in downtown Kansas City. Her passion for Kansas, higher education and the law school, and connecting with others brought her to KU Endowment.

Outside of work, Luhrs has been a K-State football season ticket-holder with her mother for more than 20 years, but also loves attending KU football and basketball games. A native of Overland Park, she now resides in bustling downtown Kansas City, Missouri. She is involved in the Kansas City community through the Junior League of Kansas City, Missouri, and BOTAR, a women’s organization focused on supporting the American Royal.