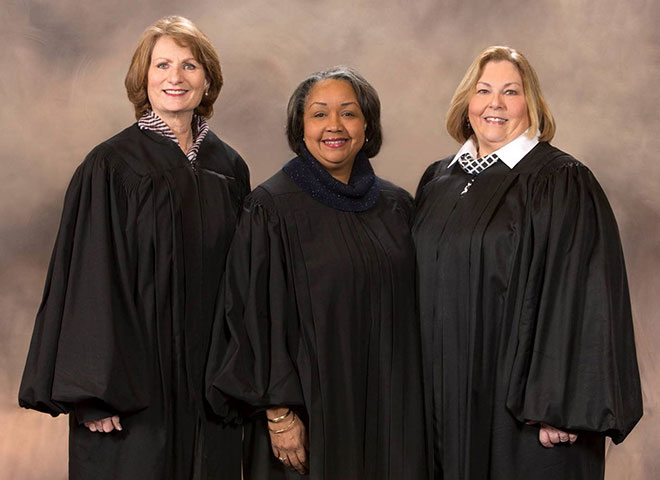 First, they were KU Law students, then they were Assistant United States Attorneys, then they were judges. Today, some 28 years after they first started working together as litigators for the Department of Justice, they are all now chief judges of their respective courts.

Janice Miller Karlin, L’80, graduated first, immediately heading to the U.S. Attorney’s Office in Kansas City, Kansas. Julie Robinson L’81, was next, first completing a two-year clerkship with Chief Bankruptcy Judge Benjamin E. Franklin, and then joining Karlin as an AUSA in 1983. And the triad was completed when Karen Arnold-Burger, L’82, who had worked for Shell Oil Company, then as a prosecutor and police legal advisor for the City of Overland Park, joined the U.S. Attorney’s Office in 1989.

These three neophyte AUSAs navigated their early years of practice together.  They not only shared litigation strategies, but maternity and baby clothes, as well as tips on raising their collective eight children, who ranged in age from infant to 7 years old. They were too busy for lunch together, but resolved to spend one lunch hour a week together, power shopping for diapers and other child necessities.

Karlin noted, “At first, I was disappointed that in 1979 when I began interviewing, the big firms were not all that interested in hiring women. As it turns out, going to the U.S. Attorney’s Office, where I was immediately assigned first chair responsibility on all of my cases, was the second best thing that ever happened to me. The first was having these two women by my side, and being able to discuss everything from the intricacies of the Federal Rules of Evidence to which brand of diapers was best.” Robinson recalled that “we counseled, affirmed and supported one another, with healthy doses of empathy and laughter.”

One by one they navigated from trial lawyer to trial judge. Arnold-Burger was the first to leave the U.S. Attorney’s Office, when she was appointed a municipal judge for the City of Overland Park in 1991. Five years later, she became the first female chief judge of that court. In 2011, Arnold-Burger was appointed to the Kansas Court of Appeals, and became chief judge of that court in 2017.

Robinson left the U.S. Attorney’s Office in 1994, when she was appointed the first female U.S. bankruptcy judge in Kansas. She also served as a judge on the Bankruptcy Appellate Panel of the 10th Circuit Court of Appeals. In 2001, Robinson was appointed a U.S. District Judge in Kansas, the first African-American appointed to that position. In 2017, she became chief judge of that court.

And the constant throughout all the years? These three chiefs have remained fast friends and loyal KU Law alumni. All have served on the law school’s Board of Governors, and Robinson is a past president of the board. They know their journey started with getting an excellent education at KU Law, and they are forever grateful to the professors who prepared them for their careers.

Although they serve as chief judges on different courts, they remain a strong support group for one another. Arnold-Burger noted, “Being with two other women who were going through the same thing was incredibly empowering. We had each other to talk to about the challenges we faced from that moment on. Now we perform the weddings of each other’s children, share pictures of our grandchildren and wonder how we did it all.”