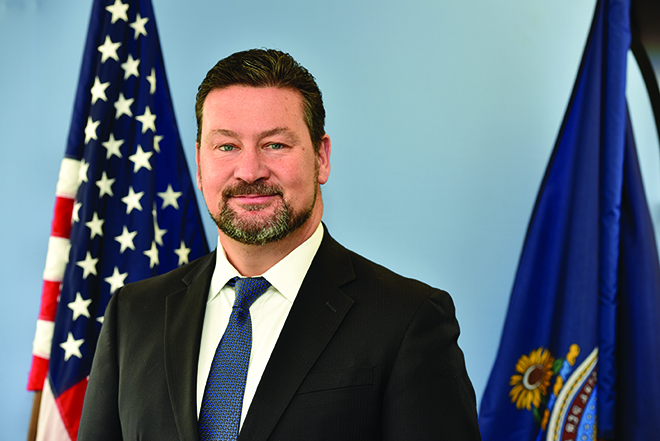 In the summer of 2005, a jury found Lawrence carpenter and former Christian school board member Martin Miller guilty of first-degree murder in the death of his wife. He was sentenced to life in prison.

Charles Branson should have been overjoyed, but he wasn’t. Not exactly.

The newly elected Douglas County District Attorney had taken office six months prior, expecting jubilation when verdicts went his way. But two young children had lost their mother through violence.

“And now, because we had been successful, they had also lost their father,” Branson recalled. “It was such a profound moment for me, realizing there’s not the joy in victory that I thought there would be. You’re still dealing with real people and real issues in the aftermath.”

Despite the complexities and challenges of the work – or maybe because of them – Branson, L’96, still relishes the opportunity to serve the cause of justice in Douglas County after nearly 14 years on the job. As top prosecutor, he manages 16 attorneys, 18 support staff and an annual budget of just over $2 million.

Over the past decade, Branson said, prosecutors have evolved from case processors to problem solvers. Statistics show that simply convicting offenders and locking them up does not ultimately reduce crime.

“Historically, our role was to prosecute, punish and move on,” he said. “Now we are really looking at making changes in how the system works to better address the needs of the people in the system.”

For example, under Branson’s leadership, Douglas County recently launched a diversion program for nonviolent female offenders with substance abuse issues. Women in the program receive comprehensive addiction treatment, including assistance with housing and child care. “We have an obligation to try to change behaviors of people who come through the criminal justice system,” Branson said, “so hopefully they won’t come through again.”

Branson never imagined a career in prosecution. The Hutchinson native was a KU business graduate who wanted to be his own boss. Within weeks of being sworn in to the Kansas Bar in May 1996, Branson hung a shingle in Lawrence. He built his practice slowly, representing a range of clients while learning to run a business. In 2002, he added part-time service as Eudora city prosecutor.

But Branson’s exposure to the criminal justice system through defense cases revealed upsetting flaws that ultimately inspired him to run for district attorney. In his view, police and prosecutors often neglected victims of domestic violence during investigation and charging, treating them as evidence.

“Then when it was time for trial, the survivor wouldn’t want to participate because she had not been supported,” Branson said. “I thought it was time to change the focus of the system.”

So when he was elected in 2004, Branson shared a simple philosophy with the attorneys in his office: A positive outcome doesn’t always mean a conviction.

“What is the best thing that can happen to this case that will make it less likely that these people will need our services again in the future? Is that charging the case? Not charging? Offering counseling and services up front? Is it going all the way through to trial?” he said. “You’re dealing with people’s relationships, and each one is different. You can’t apply a cookie cutter to those types of things.”

That maxim holds true across the spectrum of responsibilities that Branson’s office handles, including juvenile prosecution, civil litigation, child in need of care cases, mental health care and treatment matters, county code infractions and consumer protection violations. Branson and his team fulfill these duties in an era of increasing public scrutiny, elevated by recent high-profile cases questioning the conduct of law enforcement and prosecutors.

But Branson views the spotlight as an opportunity to educate the public about how the justice system works. He tries to be as forthright as possible by explaining charging decisions – always with a view toward balancing transparency and accountability with the rights of victims, witnesses and defendants.

“We have a human propensity to rush to judgment, but the nature of our work doesn’t always lend itself to being open and public about the entire process,” Branson said. “We sometimes can’t say what we believe the defendant did because our ethical obligations and rules dictate that we have to say that in court first. If we do that in the public eye, we have not honored their constitutional rights.”