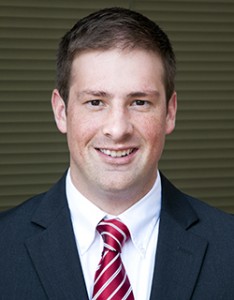 Students meet weekly, but most learning takes place at the statehouse in Topeka, where students intern with legislators. Treaster was paired with Sen. Jeff King of Independence, who serves as vice-president of the Senate and chair of the Senate Judiciary Committee.

Treaster conducted legal research, compiled data, wrote memos and presented his findings to the Senate Judiciary Committee, a rare opportunity for a student intern. His work centered on a bill to increase penalties for drunk drivers whose actions result in bodily harm to their victims. While Kansas previously charged drunk drivers who killed their victims with felonies, those whose victims were injured but did not die faced only misdemeanor charges. Treaster researched sentencing guidelines and compiled data, which he shared during his presentation.

“It was a little nerve-wracking,” Treaster said. “But after spending the whole semester there, going to meetings, getting to know senators, researching in depth, it ended up being fun and interesting.” Ultimately, Treaster followed the bill’s journey from the initial drafting stages, through committee, to passage on the floor.

Legislative Clinic students write a reflection paper at the end of the semester. Treaster came away with two surprising conclusions: how complicated Kansas politics is, and how small a role partisan politics plays in the political process. “I realized you cannot look to a person’s party label and know how they’re going to vote,” Treaster said. “You have to dig deeper to determine where someone lies. It didn’t seem like interest groups and some of the more cynical things we associate with politics were happening on a big level. It really seemed like on both sides of the aisle, senators were voting based on their beliefs, views and instincts. That was refreshing to see.”

Treaster currently puts his research and analysis skills to work as a law clerk for Judge Julie Robinson of the U.S. District Court for the District of Kansas. “Having the background from the policy and legislative clinics sets me apart from students who focused solely on civil or criminal research,” Treaster said. “It definitely helps me in doing the job.”

Treaster touts the invaluable networking opportunities the clinic provides and the legal experience for those pursuing government or litigation careers. “You get to work closely with all kinds of people in Kansas government, from research offices to the Attorney General’s office, to different state agencies,” he said. “It provides a great window into how policy is formed.”