A self-described advocate, Jessica Frederick pursued law with the intent to help others. She found her niche with the Media Law Clinic and its focus on First Amendment and individual rights. 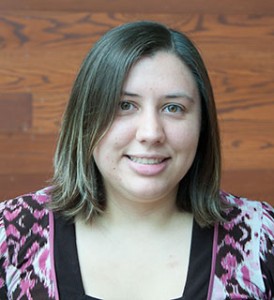 Frederick was drawn to the clinic by Professor Mike Kautsch and his open, student-centered teaching philosophy. The seminar’s discussion format exposed Frederick and her classmates to a variety of timely topics, from changing Federal Communications Commission regulations to anti-slap laws, celebrity stalking, the use of drones in reporting and former Minnesota Gov. Jessie Ventura’s defamation case against the late Navy SEAL Chris Kyle. Kautsch invited legal experts to visit the class and weigh in on the issues, while students pursued independent research and writing projects.

“I love to write, but I wanted to write about what I’m interested in,” Frederick said. “I definitely was not disappointed.”

Frederick’s project focused on the FCC’s Open Internet rules, which protect access to legal online content and prevent providers from granting some clients faster connection speeds than others.

“The regulations came out in the middle of the semester. We were watching it unfold as it happened,” Frederick said. “It’s very important from a free speech standpoint. A more conservative company could have blocked or made access slow to more liberal sources. That was perfectly legal up until this point.”

Frederick’s research culminated in an analysis that was shared with legal professionals at a media law conference in Kansas City. She plans to publish her paper and share it with prospective employers during her job search.

Frederick is pursuing the Media Law Certificate, which requires a course load heavy in individual rights classes, including Digital Privacy Rights in an Open Society, Copyright Law and Digital Works, and Media and the First Amendment. Frederick drew upon the knowledge she gained in her Media Law coursework during her summer internship with Lambda Legal, a New York City-based organization that advocates for the rights of LGBT people and those living with HIV. Lambda Legal works in a variety of areas, from youth and transgender rights to election rights and media law.

“The thing about LGBT advocacy is they’re just people. It’s not like they’re only concerned about family law and trusts and estate law,” Frederick said. “They’re everywhere. You have to have attorneys good at everything. I’ve put my Kansas education to use. One attorney wanted to know the legal statues pertaining to the Kansas Open Records Act, which we discussed a great deal in Kautsch’s class.”

Frederick looks forward to applying the skills she honed in the Media Law Clinic to her future career in advocacy or government.

“The idea that I can help people secure individual rights or help the government in assisting low-income people better their lives is way more important to me than a paycheck,” Frederick said.