Tom Meier took more than a few twists and turns on his path to graduation, but today he will earn his law degree after a 16-year journey. 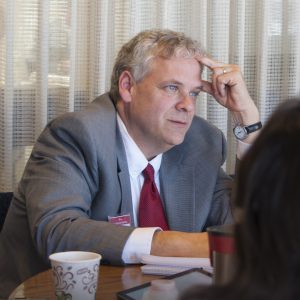 Originally from Indiana, Lt. Col. Meier, who retired from the U.S. Army in 2009, completed his undergraduate degree as an ROTC member at Ball State, then launched his 21-year military career. He began his legal education in 2000 at George Washington University School of Law in Washington, D.C. At the time he was on active duty, pursuing law school at night.

“Literally every evening we had class, and then weekends were for studying, so pretty much all other activities came to a halt,” Meier said. Life was consumed by military duties, family commitments and coursework.

And then, during his second year of law school, the Sept. 11 attacks changed everything. The Army assigned Meier additional duties and transferred him to Fort Riley.

“I was fortunate that GW Law gave me an exception to continue my studies wherever I might be — with the understanding that I still needed to come back on campus to finish some of the credits,” Meier said. In the following years, Meier split his time between Kansas, South Carolina and Georgia, training National Guard brigades mobilized to go to Iraq. Throughout it all he never gave up his dream of finishing law school, completing military duties during the day and taking courses as a visiting law student at Washburn at night.

Meier next spent a year on deployment in Iraq, where he worked to find and bring to trial former members of the Hussein regime. The firsthand exposure to international law strengthened his determination to complete his legal degree. “It led to me thinking I wanted to do international law work,” Meier said. “Trying to help a host country implement the rule of law within their culture – that’s what I want to do after I graduate.” After he returned from Iraq, Meier was transferred to Fort Leavenworth, where he completed his military career and continued his studies as a visiting law student at KU.

When Meier retired from active duty, the prospect of returning to D.C. to finish law school seemed out of reach. But KU Law Dean Stephen Mazza had a solution: Meier could transfer to KU and take advantage of American Bar Association exceptions for various requirements in recognition of students who have served in the military. “As it worked out, not only was I accepted into KU Law,” Meier said, “but I was able to enroll in enough courses this semester to graduate and get my GI Bill to pay for the tuition.”

When Meier arrived in Green Hall as a full-time student in January 2016, he faced another transition: adjusting to life without the full-time paycheck he had been earning as a civilian military analyst. He continued working part-time, his schedule once again packed with family, career and school responsibilities. Today, he’ll gather with family and friends to celebrate the degree he began earning 16 years ago.

“The main reason for my success was the support of friends and the faculty and staff at KU Law,” Meier said. “There were so many things going on at the same time that an extra hand from time to time was really helpful. More so than I think many of them know.”

— This is the fifth and final post in a series profiling a select few among the many outstanding members of the KU Law Class of 2016. Read our profiles of Ashley Akers, Bryce Langford, Grecia Perez & Jacque Patton, and Bradley Thomas.