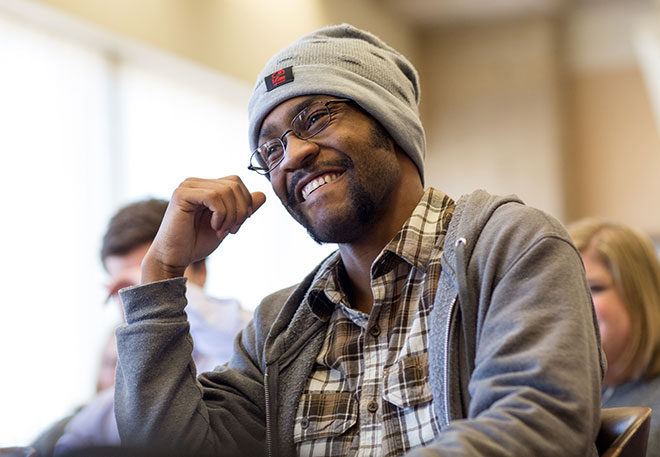 Three years ago, Matt Scarber packed up his life in Arizona into a backpack and two suitcases and headed to Lawrence for the first time. Leaving his friends and family for a state he’d never been to wasn’t easy, but Scarber set out to become the first lawyer in his family.

Scarber has returned the favor countless times since finding his footing in Green Hall, as revealed in comments from his classmates:

“BLSA’s Thanksgiving Food Drive has been an amazing experience to be a part of for the last three years,” Scarber said. “Collecting nearly 5,500 pounds of food items for the hungry and collecting $3,328 in monetary donations are indescribable experiences I will remember forever.” 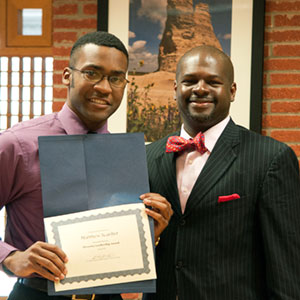 For his many efforts to organize programs and activities to raise social awareness and benefit the broader community, the University of Kansas singled out Scarber as a student finalist for its inaugural Diversity Leadership Award.

During his summers at home in Arizona, Scarber stayed focused on his legal career. In Tucson, he interned for the Pima County Legal Defender’s Office – a complement to the work he did at KU Law representing incarcerated clients in the Project for Innocence and Post-Conviction Remedies.

Although Scarber has called Lawrence home for the past three years, he plans to return to Arizona to take the bar exam. He’s looking forward to applying all he has learned at KU Law to helping those in need as a criminal defense attorney.

This post is the third in a series highlighting just a few exceptional members of KU Law’s Class of 2017. Check out stories about Kriston Guillot and James Houston Bales, and stay tuned for more graduate profiles as we count down to the Hooding Ceremony on May 13.