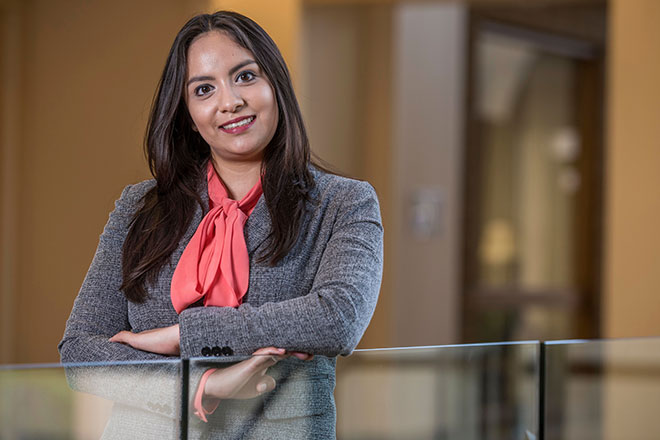 Sylvia Hernandez is the first to note that her transition to law school wasn’t an easy one. Moving from El Paso, Texas, to Lawrence required a big adjustment and new perspective. “In El Paso I never saw myself as a minority,” Hernandez said. “However, here in Kansas and in law school that was one of the hardest things I faced. This, unfortunately, turned me into a shy person, which I have never been.”

As she got involved with the Hispanic American Law Students Association and absorbed herself in challenging coursework, Hernandez found her niche.

“I came to law school with the mentality to be a litigator, but I began to doubt myself,” Hernandez said. “I took a jurisdiction class that forced me to gain my confidence back. It was one of my favorite classes, and it made me realize I could do this.”

“I was never fixed on one type of law,” Hernandez said. “I always kept an open mind and believed that I wouldn’t know what I liked if I didn’t try it.”

After interning with the Paul E. Wilson Project for Innocence & Post-Conviction Remedies, Hernandez enrolled in KU Law’s Medical-Legal Partnership, then interned with Baldwin & Vernon in Liberty, Missouri. The internship led to a job offer as an associate, doing plaintiff’s work in employment discrimination cases.

In addition to her practical experience, Hernandez remained heavily involved on campus. She served as a student senator, a member of the Legal Services for Students advisory board, and as president of HALSA.

“Leadership positions were really rewarding. I like to be involved, and I like to take on  responsibility,” Hernandez said. “Being part of the Student Senate and Advisory Board of LSS gave me so much knowledge on how the university worked. I learned a lot about the issues students faced.”

While she initially felt like an outsider at KU Law, Hernandez’s perspective ultimately proved to be an asset to her clients and the KU Law community. “Two of my clients spoke only Spanish,” she said, recalling her field placement with the Medical-Legal Partnership. “Their faces lit up when they realized I could truly understand their situation. It was fulfilling to put people at ease while I advocated on their behalf.”

“It is exciting but also a big responsibility,” Hernandez said.

This post is the sixth in a series highlighting just a few exceptional members of KU Law’s Class of 2017. Check out stories about James Houston Bales, Hannah Brass, Kriston Guillot, Taylor Ray and Matt Scarber, as we count down to the Hooding Ceremony on May 13.