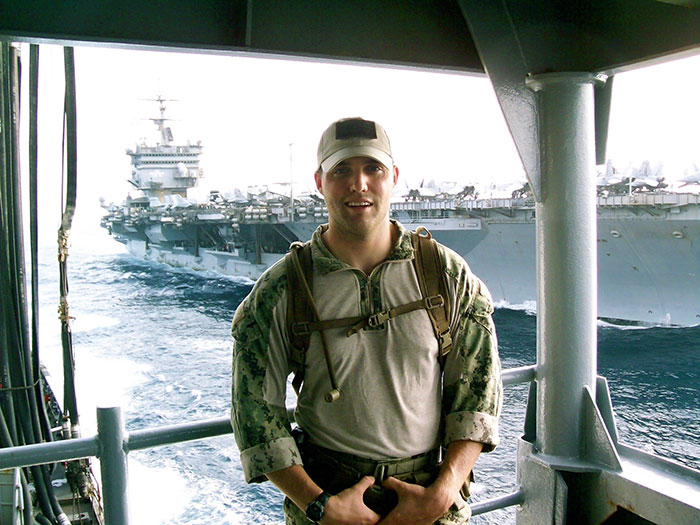 Derek Kandt and the USS Enterprise in the Arabian Gulf in 2012.

Army Specialist Spencer Duncan was serving in Afghanistan when his helicopter was shot down in 2011, killing him and 37 other U.S. troops and support personnel.

“Specialist Duncan and his family have done and are continuing to do awesome work on behalf of men and women who have served,” Kandt said. “Duncan’s family and friends are passing on the message to his brothers and sisters in arms that they still have a life to lead and they can make it count. The Make it Count Foundation and Student Veterans for America both agree that the best way for them to do that is in pursuit of an education.”

Kandt is a Master-at-Arms Second Class in the United States Navy Reserve. He attended boot camp in 2009 and deployed in 2012, providing security and collaborating with independent security teams aboard a Navy supply ship. Last summer he interned with the Navy JAG Corps in Bremerton, Washington. 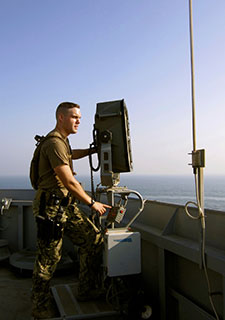 Kandt on the ship’s signal bridge with a long range acoustic device. The device warns vessels away from the ship’s security perimeter.

“My job in the Navy is responsible for filling Military Police roles, so it has given me a lot of law enforcement insight,” Kandt said. “That provides a great foundation for criminal law. I also believe the military breeds a certain sense of professionalism that has served me well in law school and in my interactions with members of the legal community.”

Though law school ends for Kandt next year, he has no plans to stop serving his country. “I would very much like to continue to serve after completing my education,” Kandt said. “I was first inspired to pursue law school as a path to the JAG Corps. I am also considering the officer corps and continuing in my reserve capacity. The military will always be a part of my life.”

Kandt feels strongly about supporting veterans as they pursue higher education. This commitment led him to get involved with Student Veterans of America.

“I have a real passion for my fellow service members,” Kandt said. “They leave the service with a lot of opportunities and valuable skills, but many of them have been out of the classroom for a long time, or never felt like they belonged there in the first place. An education is their best bet to succeed after they get back.”