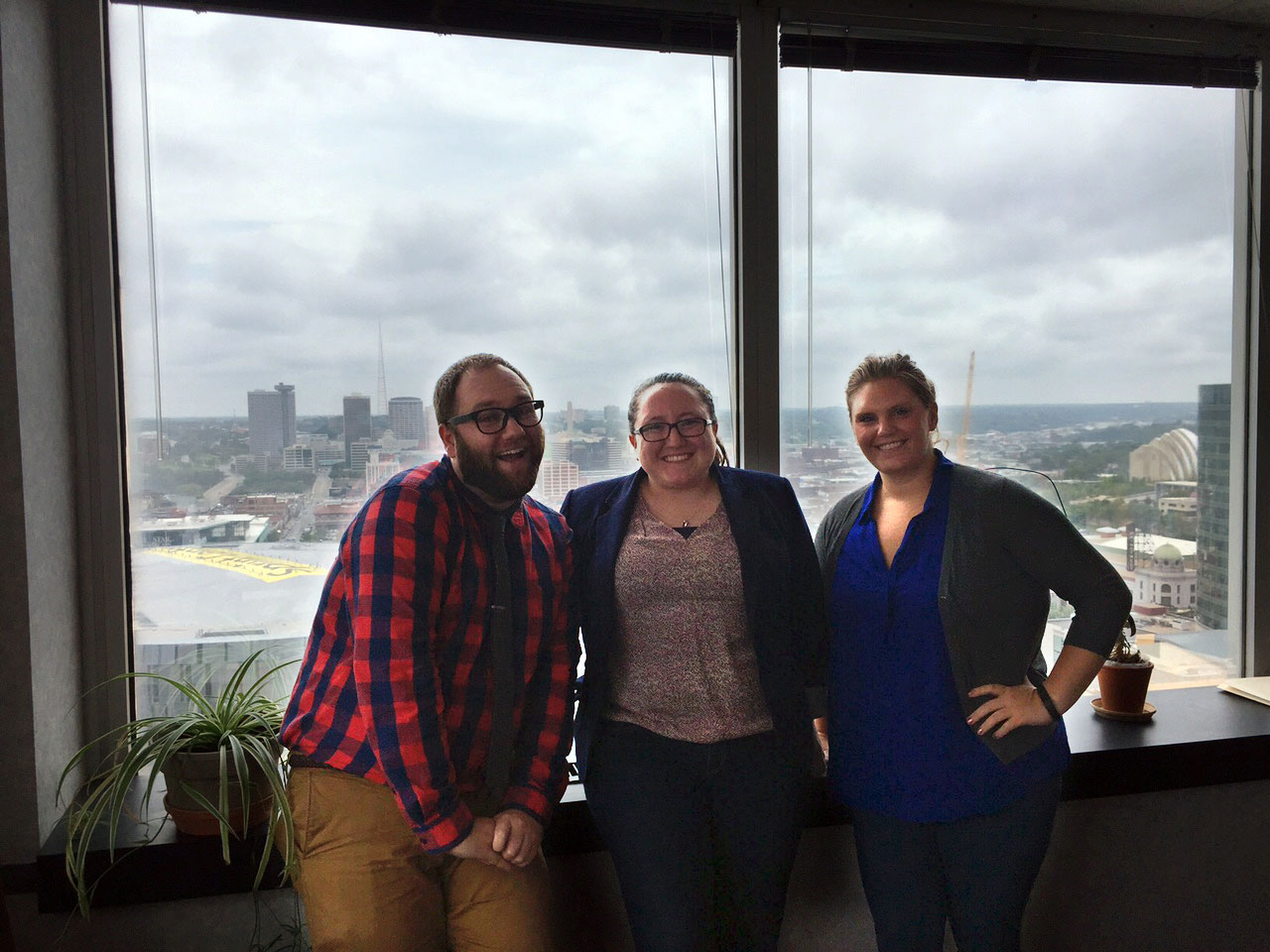 KU Law students Travis Freeman, Libby Snyder and Cori Viola are spending the summer as interns at Legal Aid of Western Missouri. Also an intern (not pictured) is Maggie Turek.

This summer I was given the incredible opportunity to work for LAWMO (Legal Aid of Western Missouri). LAWMO is a legal services nonprofit that assists low-income individuals in the Kansas City metro area and beyond. One of the great things about interning at LAWMO is the exposure to a wide array of legal practices. LAWMO is organized by practice area and interns are encouraged to select an area of law that interests them. Having lived abroad for several years, I often heard stories of the nightmarish process that is “American Immigration.” My interest in immigration law was sparked by hearing about all of the challenges my friends faced tying to secure something as simple as a tourist visa. I saw that LAWMO had an immigration team, so I decided to apply.

Applying to the position is a fairly straight-forward process, and the instructions are available on the website. However, I was a little bit surprised by the “Hunger Games”-style interview process. We were dropped off in the middle of nowhere with no food or water. We were told the last interviewees left alive would get the job. So, armed with only our wits, we began the competition, each of us hoping that the odds would be in our favor. Luckily, to avoid getting called on in Professor Lucas’s Contracts class, I had perfected a form of camouflage that involved painting myself to look like a rock. Utilizing this skill, I was able to avoid detection and stayed alive long enough to secure one of the intern positions.

So none of that actually happened, but now that I have your attention, I want to talk to you about why working for an organization like LAWMO is so important. I’m sure most everyone is familiar with the last line of the Pledge of Allegiance, “with liberty and justice for ALL.” Even though this principle is enshrined in our pledge, socioeconomic barriers often make it difficult for low-income individuals to access legal services. Quality legal representation has historically been available only to those with high enough incomes to afford it. This means that the most vulnerable communities are often unable to participate equally in our justice system. The attorneys who work at LAWMO recognize that this is a problem and, despite some of the difficulties nonprofit attorneys face, made a personal and professional choice to level the legal playing field.

You’re probably asking yourself, “What possible difficulties could a nonprofit attorney face?” Well, I’ll be honest with you. As a nonprofit attorney, you likely won’t have as big a house or as nice a car as your peers working in the private sector. However, the work that you do will help so many people that, personally, I think the trade-offs are worth it. Over the course of the summer, I’ve been able to:

Not only do I love the work I’ve been doing, but I’m actually using the stuff I’ve learned in school. Pro tip: Turns out those Lexis and Westlaw training classes are actually really, really useful.

However, if the idea of foregoing those fabled six-figure starting salaries for a more modest income doesn’t appeal to you, there are still ways you can help. LAWMO has a Volunteer Attorney Project which allows private sector attorneys to take on LAWMO cases, pro bono of course. Participants in this program are covered under LAWMO’s malpractice insurance, provided with any resources/contacts they need, and get to feel good about helping someone in need.

I want to leave you with one final thought: We often say that America is the greatest nation on the planet (gotta love that American exceptionalism). But how can this be true when our poorest and most vulnerable are left to fend for themselves in a legal system not known for its “ease of use”? I think the services that LAWMO provides highlight one of the greatest things about our country, that even the most privileged among us – and if you are in law school, you are privileged – will still reach out to help those most in need.

— Travis Freeman is a 2L and KU Law Student Ambassador.