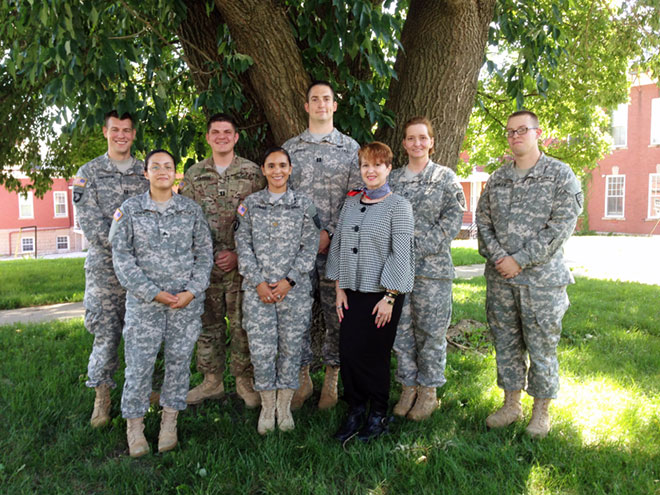 This summer I was given the incredible opportunity to work as an extern with the U.S. Army Trial Defense Service (TDS) at Fort Leavenworth. Because of my Army background, I knew that I wanted to work with the Army Judge Advocate General (JAG) Corps. The representative at the JAG recruiting office worked hard to get me placed at Fort Leavenworth so that I could commute from Lawrence, and the Fort Leavenworth office placed me in TDS so that I would have the opportunity to experience criminal law on a daily basis.

Trial Defense Service is similar to a public defender office. However, if a soldier is undergoing certain actions, he has a right to a TDS attorney regardless of his ability to pay for another attorney. Clients came into the office for a variety of actions against them, ranging from courts-martial to administrative separation boards.

I wasn’t always in the office or the courtroom. I also went to client meetings and parole revocation boards at the U.S. Disciplinary Barracks and the Midwest Joint Regional Correctional Facility. Both facilities are located on Fort Leavenworth and house only service members.

I also got to participate in physical training before work. Although not a requirement, I chose to participate so that I could interact with the other lawyers and paralegals that I did not have an opportunity to see on a daily basis. It was not all running, push-ups and sit-ups, though. We also played Ultimate Frisbee. It was a lot of fun, but you didn’t want to have a point scored against you or you would be doing push-ups.

Overall, my externship experience has been phenomenal. I would recommend applying for a 2L internship or volunteering to anyone who might be even remotely interested in the JAG Corps. Even though I knew for sure that I wanted to serve, that is not a requirement. They offer a variety of legal opportunities that include administrative law, legal assistance, military justice and trial defense.

— Kip Randall is a captain in the U.S. Army who hopes to transfer from the infantry to the JAG Corps after earning his law degree. During his nine years in the Army, Randall has been stationed at Fort Drum, New York, and Fort Benning, Georgia. He deployed to Afghanistan in support of Operation Enduring Freedom for 12 months in 2009.