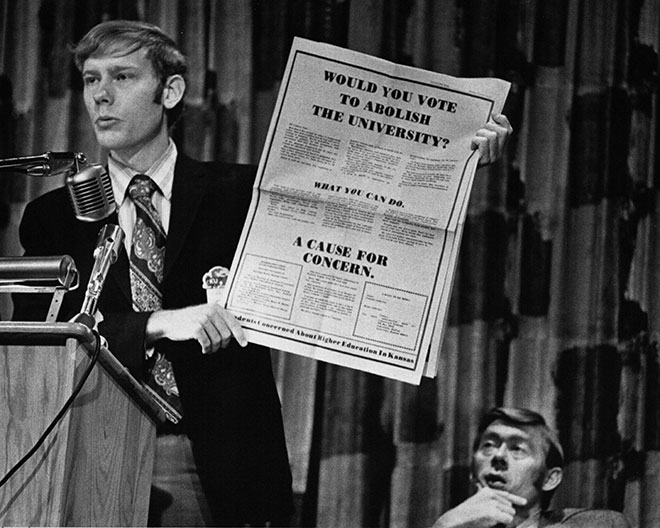 Rusty Leffel arrived on the KU campus as an undergraduate in 1966 and stayed until he finished law school in 1973. In his seven years on the Hill, student life evolved from a social experience to a political one. As a student leader, Leffel helped usher in that change.

“When I first came to KU the student council was based in social groups — fraternities and sororities, living groups,” Leffel said. “I had a substance-based agenda. I stayed at KU Law in part because I had a list of things I believed needed to be done at KU.” Leffel devoted his time in Lawrence to reforming student government, bolstering its impact on the university’s mission. “We declared war on the old way,” Leffel said. “We were dedicated to making student government more issue-oriented.”

As the student body became more active and vocal, unrest surfaced. The Kansas Union was set on fire, and the computer center was bombed. National Guard troops were called in to patrol, and faculty and students spent the night on campus to protect buildings.

“People were mad. We started seeing the Legislature cut funding for KU. As students, we felt we had a stake in this. We needed to express our concern that higher education is important. So we did.”

While some students protested national issues, Leffel and his fellow activists advocated for local initiatives. “Vietnam was not really something the Student Senate could control, so we went back to the people of Kansas,” Leffel said. “What can we do?”

Leffel helped found Students Concerned for Higher Education in Kansas, a group dedicated to getting results through dialogue and cooperation rather than disruption. “We tried to encourage every student group on campus to express their concerns, to express the importance of higher ed individually and to our state,” Leffel said.

KU’s student government responded to the state’s budget cuts by proposing that funds raised from student activity fees cover the shortfall. SCHE mobilized a campus-wide campaign to explore the role of student activity fees in the university’s budget, and the Student Senate measure was narrowly defeated. Gov. Docking vetoed the cuts and funding was restored, an outcome Leffel called “highly successful.”

Years after he graduated, Leffel’s legacy continues. KU still presents the Rusty Leffel Concerned Student Award annually to students committed to furthering the ideals of the university and higher education, a gesture that “humbles” and “overjoys” Leffel.

He credits his legal education with bringing a lawyer’s sensibilities to his activism. “It helps us to understand both sides of an issue — to study, research, present and advocate for all sides of a concern,” Leffel said. “The underpinning of democracy is the ability to argue, discuss and dialogue. Students at KU Law were prepared not just to be lawyers, but to be citizens.”

— A version of this post appeared in the Fall 2015 issue of KU Law Magazine. The issue celebrated the career of Martin Dickinson, KU Law’s longest-serving professor, and included reflections from several of Dickinson’s former students.