Soaking up Turkish culture in Istanbul 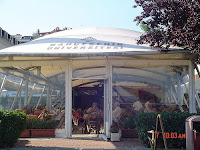 University Cafe on the Bosphorus
MORE PHOTOS ON FLICKR

Last Saturday, all of the students who had arrived went on an expedition to find the university and had dinner nearby. Bahcesehir University is a wonderful facility with a spectacular view! The school has an outdoor cafe that looks out onto the Bosphorus toward the Asian side of the city. You can also see the old town (on the European side) where all the well-known sightseeing spots are located.

Classes are going well. Very interesting material. We have a handful of Turkish students that speak in class and lend a different perspective to our discussions. They have acted as guides of Turkish culture both in and out of the classroom. Fezya and Rahime took a few of us out to lunch earlier this week where we really got to talk about our different cultures.

I spent the entire day in the old town visiting as much as I could. Ayasofia (Hagia Sophia) is large and unfortunately under lots of reconstruction. They are busy uncovering the old Christian mosaics from the Islamic plaster. There is a nice garden in between Ayasofia and the Blue Mosque (free admittance!) which really is a large, ornate open space to pray. It is an unfamiliar layout for me, nothing like the churches I am more used to. No pews, no alter, no iconography whatsoever. Instead, the roof and walls are covered with ornate tiles and painted patterns. Topkopi Palace compound abuts Ayasofia on the other side. The gardens are vast and beautiful. It is overflowing with trees and flowers and families. It was too late in the day to justify a 20TL ticket into the museum (I spend quality time in museums) so that is on the list of things to do tomorrow, along with the Islamic Technology and Science Museum and the interior of Topkopi Palace itself.